How does the retina work?

In this chapter we are going to deal with the neurological bases of vision at the retinal level and for this, we will see the process of photochemistry and transduction in the retina, the convergence phenomena of photo-receptors on ganglion cells and the neural networks of lateral inhibition, which makes it possible to explain the perception of contrasts and which constitutes the first key point in the vision of objects.

How does the retina work?

In this chapter we are going to deal with the neurological bases of vision at the retinal level and for this, we will see the process of photochemistry and transduction in the retina, the convergence phenomena of photo-receptors on ganglion cells and the neural networks of lateral inhibition, which makes it possible to explain the perception of contrasts and which constitutes the first key point in the vision of objects.

The Earth's atmosphere only allows radiation between 300 and 1100 nm and wavelengths greater than 850 nm to pass through. Its energy quanta have insufficient energy to isomerize organic molecules. On the other hand, energies below 300 nm can destroy some proteins.

The visual system uses the band between 380 and 780 nm. A photochemical reaction consists of the action of a photon (luminous quantum), on an atom, it would excite the electrons making them jump to a more peripheral orbit, raising the energy of the atom, until causing the splitting of the molecule.

The light in the retina of the eye

The photochemical reaction in the retina consists of the action of photons of light on the pigments of the photoreceptors, causing hyperpolarization of their outer membranes.

At 20º from the fovea (zone of maximum sensitivity), with an optimal length of 510 nm, it is known that the minimum energy that must impinge on the eye for the photochemical effect to be generated and a visual signal to begin is, 2,1, 10 x 10 -5,7 to 10 x 10 -6, depending on the species. Considering the absorption and reflection of light in the cornea and other tissues of the eye, we know that 14 to XNUMX photons will suffice to initiate the activation signal of the photo-receptors.

KUHNE (1879) was the first to isolate a photosensitive substance in the retina, located in the outer segment of the canes, calling it erythropsin because of its bright orange-red color. He was given rhodopsin when he used the Greek prefix "rodhos" which means pink. 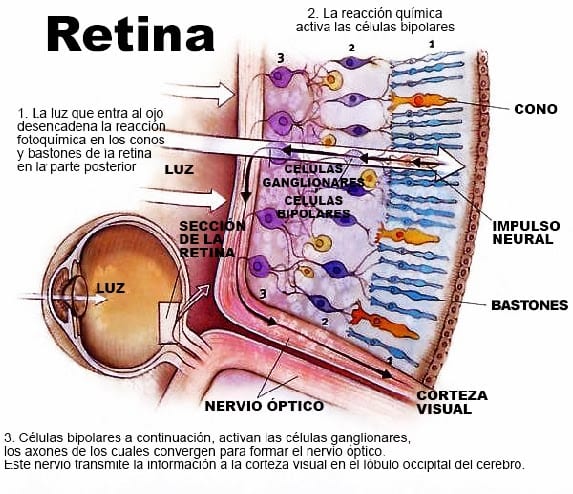 Rhodopsin is a conjugated protein included in the lipid double layer of the external article of the canes, in their discs.

It is composed of the glycoprotein opsin and the 11-cis isomer of the aldehyde of Vit A or retinal, with a molecular weight of 27.000 and 41.000 daltons, respectively. When the rhodopsin molecule, the retinal 11cis, whose structure has an elbow shape and is bound to opsin, is exposed to light, it undergoes transformation to a rectilinear, all-trans retinal configuration. Retinal isomerization is followed by dissociation of the molecule into free and all-trans opsin.

When a photon is absorbed by rhodopsin it rapidly discolours, it is activated, the retinal passes from the cis to the trans form and the molecules are cleaved, causing hyperpolarization of the outer membrane of the photoreceptor, following a biochemical sequence that is known as phototransduction and shown in the figure: 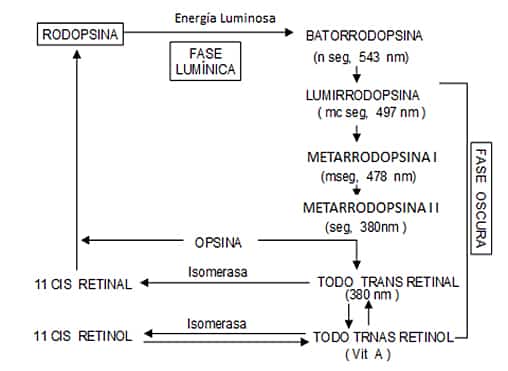 When the photon reaches the retina it must be absorbed by the photo-receptor, the signal will be ampbound to be fully effective, through the enzymatic cascade.

The biochemical reactions that will take place end with the hydrolysis of cyclic GMP and the closure of the sodium and calcium channels. The action of the photon in the photo-receptor triggers the hyperpolarization of its external segment, it is what we call the resting potential, and it has different duration in rods and cones, and can last up to 1 sec, which would explain that an image that is projected on the retina for a millionth of a second, it can produce the sensation that we continue to see that image for more than a second (afterimage).

In most cells of the organism, there is a higher concentration of sodium on the outside than on the inside and, on the contrary, in the case of potassium, more concentrated on the inside than on the outside. This gradient is maintained thanks to the action of the sodium-potassium ATPase enzyme. A different situation occurs in the photo-receptor. In the dark, the plasma membrane of the outer segment is very permeable to sodium, while the inner segment, its plasma membrane, is very little permeable to sodium and much more permeable to potassium.

Sodium enters the outer segment through sodium channels (membrane proteins), diffuses into the inner segment and exits again through the action of the enzyme ATPase. What we call dark current is established (HAGINS 1970). The entry of sodium is what causes the depolarization in the photo-receptor, keeping open the calcium channels that exist in the synaptic button. This produces a constant release of the neurotransmitter, glutamate, into the bipolar cell.

What happens when the light reaches the retina?

When light reaches the retina, this flow of ions is blocked. Almost exponentially, the entry of sodium from the outside is slowed down, this means that the inside of the membrane becomes more electronegative. Sodium leaves through the internal segments and no longer enters through the external segment, hyperpolarization occurs, that is, a decrease in the dark current, thus reducing the release of neurotransmitter in the synapse (glutamate) and a signal is generated that will give as a result the genesis of action potentials in ganglion cells.

The reduction of intracellular calcium inhibits granulatocyclase and activates phosphodiesterase, thus reopening channels for sodium and calcium, recovering the photo-receptor after light excitation, leaving it ready for the arrival of a new photon. 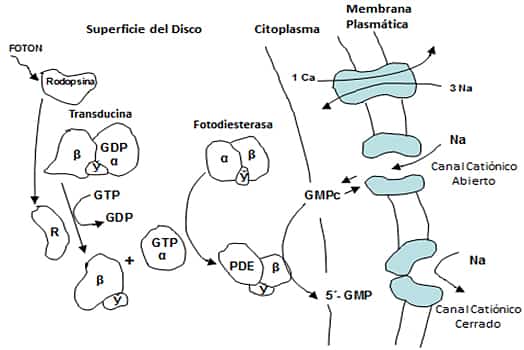 By observing the connections of rods and cones with other neurons in the retina, we will realize that there is a different level of convergence in each of these photo-receptors.

La The convergence of the canes is greater than that of the cones. An average of 120 rods converging on a single ganglion cell is admitted, while only six cones converge on a ganglion. This reduction is even greater in the fovea, where we have unitary connections, a cone and a ganglion, that is, there would no longer be convergence, it would be a direct connection in the fovea.

This difference between cones and rods explains that cone-mediated vision is more accurate in detecting details, while rods have better contrast sensitivity and less sensitivity to detail, now we will see this in detail.

The retina and the contrast

The canes are more sensitive than contrast cones because they need less light to generate a response and, especially because of the phenomenon of convergence, which determines a summation of the intensities.

If we have two ganglion cells that each need 5 units of intensity to activate, and on the first we have a set of five rods converging on it and on the second the connection of a single cone arrives, when stimuli of 1 unit arrive intensity, for example occupying an area that activates 5 photo-receptors, the rods will be stimulated and each one of them will send 1 unit on the convergence ganglion, adding 5 units, the minimum required to activate it, while in the case of the cones, when activated, send only a signal of 1 unit and, if the stimulus activates 5 cones, as each one connects with a cl. ganglion, always reaches the cl. ganglion 1 unit, there is no summation effect as in rods since there is no multiple convergence, therefore this stimulus does excite the ganglion cell of the rods but not the ganglion cells of the cones. This explains why rods are more sensitive to light than cones.

Capabilities of the retina to perceive details

When we analyze the ability to detect details, we see that the phenomenon of convergence produces the opposite effect. In the cones of the fovea, thanks to the fact that each one connects with a ganglion, allows the resolution of the information to be greater, we can analyze the image point by point while the canes, as several converge on a ganglion, the information is diluted and the resolution goes down. This determines the concept of visual acuity, or ability to perceive the details.

In the dark, the visual acuity diminishes because the cones stop working and the vision is due only to the action of the canes, with less resolution capacity than the cones, for that reason we see less clear.

Excitation and inhibition of photoreceptors in the retina

All neural systems work with neural networks that form circuits. That is, a set of neurons connected to each other. When we are in the situation of the fovea, where each cone has its ganglion, the activation of a cone-ganglion is not affected by the stimulation of other contiguous cones, while in the peripheral retina, where convergence phenomena predominate, the activation of a rod or more contiguous rods does determine variations in the ganglion where they converge, the more rods are stimulated, the higher the frequency of response in the ganglion, as shown in the figure. 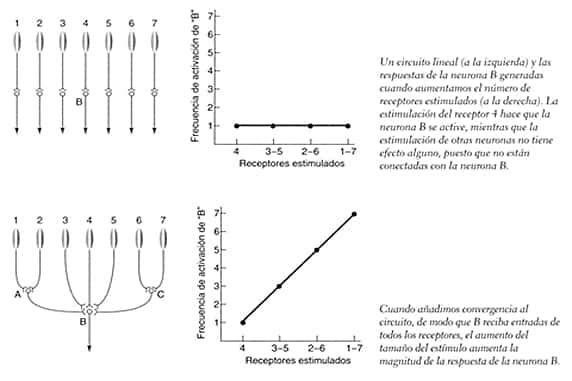 Remember that the retina is formed by different types of cells and, the activation of the receptor, cone or cane, generates stimuli that reach the ganglion cells through the bipolar, horizontal and amacrine cells, which allows us to think that very diverse, with avenues of excitation or inhibition. These possibilities allow us to understand the concept of campor receiver.

In the previous example, we would have a campor receiver corresponding to a cell. lymph node, in this case B, of the ON center and OF periphery type, also called on-of or center-periphery, since if the central zone is stimulated, a positive activation response is given but, if the peripheral zone is activated , the B response is inhibited and, if all the receptors of this B lymph node are activated, a minimal response occurs, since the excitation of the central zone is inhibited by the peripheral zone. This type of response, center periphery, can occur in the way we have just seen or, somewhat more complicated, ganglion cells A and C may not contact B directly, and do so indirectly through connecting cells, such as horizontal and amacrine cells. that transmit the inhibitory effect, as in the previous example, but will allow us to better understand what we know as lateral inhibition, which is key to detecting contrasts. 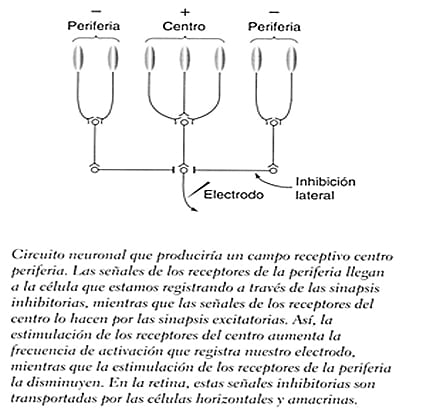 Lateral inhibition was demonstrated in 1956 by Hatline, Wagner and Ratliff, using the crab of the species Limulus and allowed demonstrating how the stimulation of adjacent receptors can inhibit the response of a central receptor, as shown in the figure.

The phenomenon of lateral inhibition It allows us to explain phenomena such as Hermann's grid, where when looking at the grid as a whole, we see that at the intersections there are gray points, points that disappear if we look directly at the intersection, showing that they are not real. 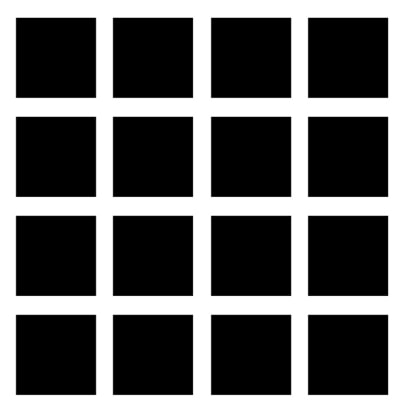 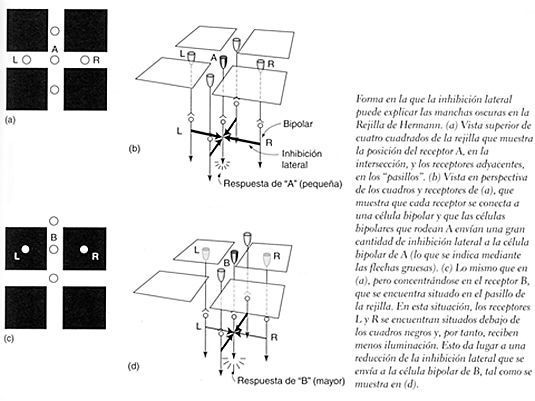 Another effect that is explained by the lateral inhibition are the Mach Bands.

As shown in the figure, if on an illuminated sheet we place something that casts a shadow, the dividing line of the area in shadow with respect to the area that is still illuminated, we do not perceive it as a well-defined line but rather a narrow band light and, in the light area, next to the dividing line, a dark band is seen, however, the analysis with a photometer shows that there are no such bands, it records a sharp and well-defined separation between the darkest and the lightest area What we see, these separation bands is a subjective phenomenon known as Mach bands and they are due to the phenomenon of lateral inhibition. 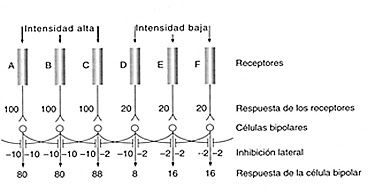 The phenomenon of lateral inhibition allows to establish a physiological mechanism to highlight the edges and also explains the phenomena of optical illusions like the simultaneous contrast of clarity, the cross of Benary or the illusion of White. 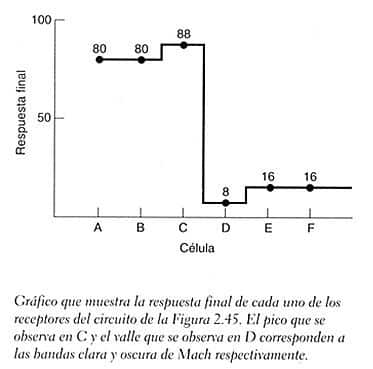 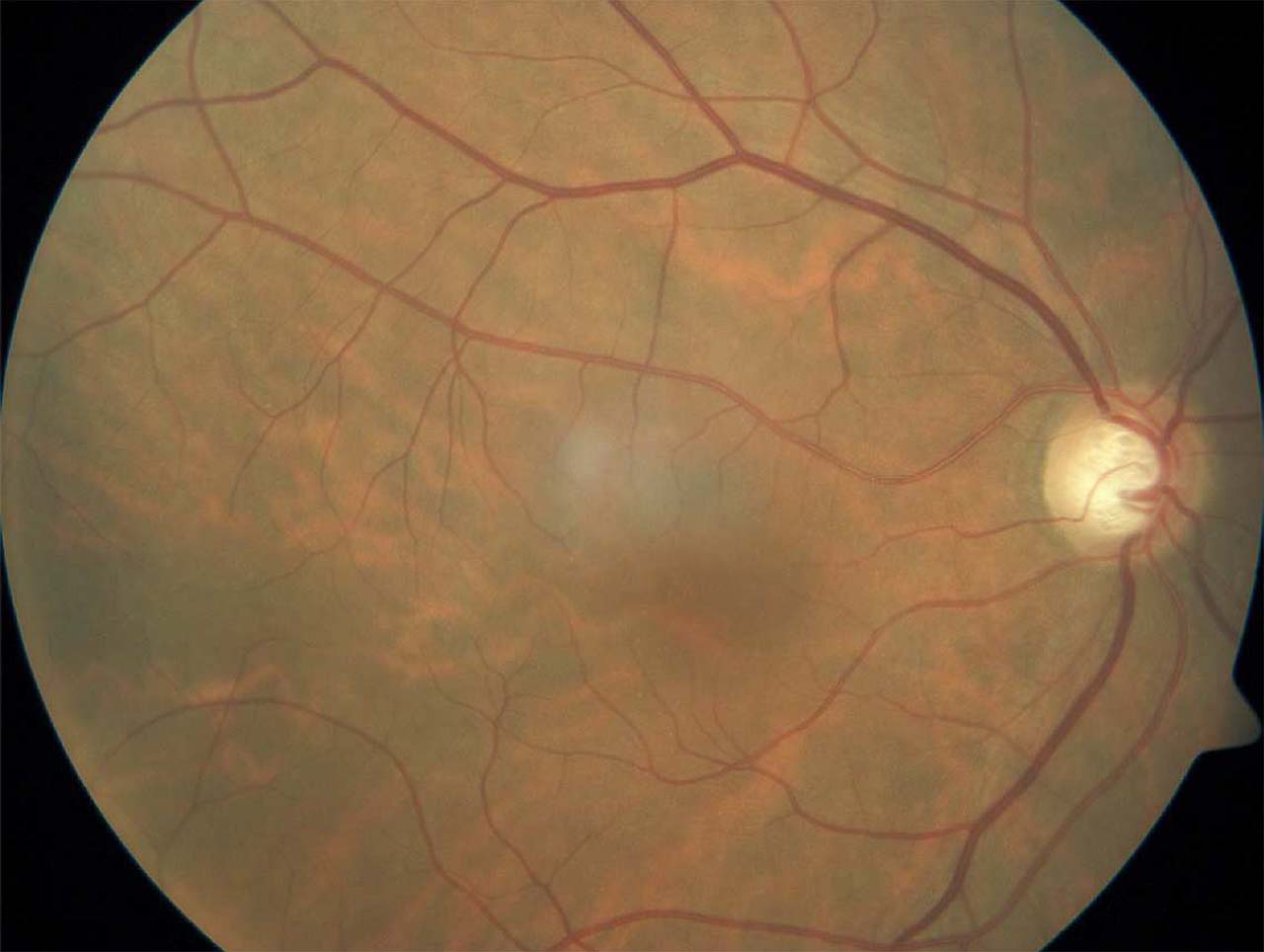